Thanks for visiting my blog. 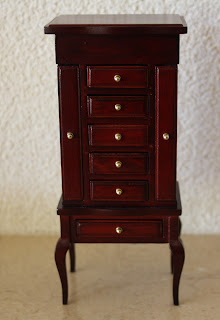 A lot of drawers. That's for socks and underwear. 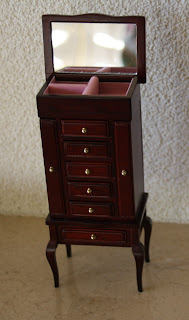 A mirror on top ?  Okay you put your jewelry on top and when you put the mirror in the right angel you can find your jewelry. 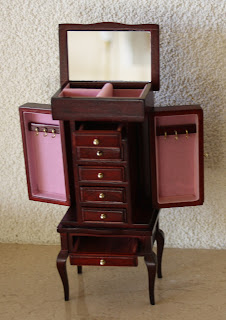 I also got a nice present from my son and daughter. But I couldn't show it yet. I didn't know what it was.
My first thought was something for jewels but my husband brought me into confusion.
Such a big case for jewelry wasn't possible according my husband. Okay.... I have a smaller jewelry box so I went surfing on the internet.

I couldn't find a case or cupboard that was similar. The children just bought me a nice present but didn't ask what it was. So I was wondering during the evening what it could be.

This morning I took a picture and mailed the picture to the store with my question. This afternoon I got my answer. It was an English jewelry box. Only from which era she didn't know.

So I went surfing again and I came across a similar jewelry box. Unfortunately the age was not mentioned. But I saw that there were pocket watches hanging in the side door.

I'm glad to know where it was used for. It would be a bit embarrassing when I put it in my doll house filled up
with underwear and socks. Yes I know that we use antiques nowadays for other purpose but not in my dollhouse.

Posted by Dorien Litjes at 16:43 7 opmerkingen:

I was just explaining to Natalia who Sinterklaas is. But while I was writing it down I realized that it's a strange story.

It's a man on a horse that rides on the roofs of our houses during the night. He has a lot of helpers called Zwarte Piet (black Peter). On the 5th of December he and his helpers are traveling around the Netherlands and drop presents down the chimney. When you don't have a fireplace they came through the heating system and sometimes through the door.
They come into the house. The children put a shoe nearby the fireplace (nowadays by the door) with a carrot, bread for the horse....and sometimes water and drawings for Sinterklaas also.

When I was younger we always ate hotchpot with carrots during the time that Sinterklaas was in our country.

Sinterklaas was a Saint who lived in Turkey.
While I'm reading my story I think everybody that doesn't know who that guy is declares me nuts.
Today Sinterklaas lives in Spain and he's coming to the Netherlands by boat. This Saint was a real person who lived in Turkey in a place called Myra around the year 300. He was a very generous person that shared his belongings with the poor people. He died on the 6th of December so that's the day the children find their presents in or nearby their shoe.


When you go to Sinterklaas You tube you can see how we Dutch people celebrate this party....so I'm not crazy but when I wrote this down I really thought people will think I'm crazy.

Posted by Dorien Litjes at 12:42 4 opmerkingen: